Extension of the Off-Payroll Rules to the Private Sector

The Intermediaries Legislation and came into force in April 2000 as part of the Finance Act. Designed to tackle “disguised employment”, where companies engage with self-employed workers, usually through an agency, rather than as a full or part-time employee. 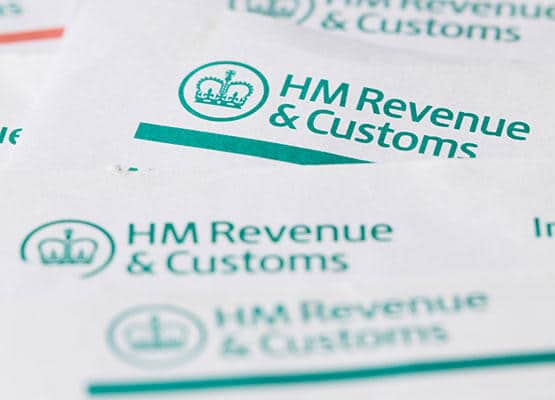 At the time a self-employed worker was known as being “inside IR35” (IR35 refers to the original HMRC designation in their 1999 press release) or “outside IR35.

“Inside IR35” simply means for tax purposes, the self-employed worker is considered to be an employee.

“Outside IR35” means for tax purposes, the self-employed worker is considered to be in business for themselves.

Until recently the assessment for being inside or outside IR35 was made by the self-employed worker.

Some employers used this arrangement to avoid paying National Insurance Contributions and the usual employment rights and benefits. Some employers went as far as to force their workforce off the books and into “self-employment”, often on a “finish Friday, start Monday” arrangement.

It should be noted if an inspector from HMRC look into the arrangement between the employer and the self-employed worker, HMRC may disregard the contract and look instead at the reality of the employer / self-employed relationship.

If the self-employed worker is found to be “part and parcel of the company”, then disguised employment arises, and income tax and National Insurance Contributions must be paid to HMRC subject to a time limit of 6 years. 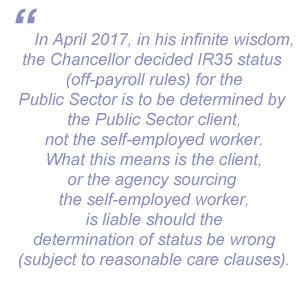 This practice, known as “blanketing” is not allowed under the off-payroll rules, although clients are making these assessments for fear of HMRC holding them liable for the employer tax and national insurance at a later date.

Currently, these rules only apply to the public sector when engaging the self-employed worker directly or through agencies.

Why is this important to you?

In a nutshell, unless the Chancellor has a change of heart, this is going to raise the cost of employing temporary staff by up to 25% as self-employed workers either attempt to recoup lost earnings or demand equal employment benefits in exchange for equal taxation.

Yesterday (30th October 2018), despite intense lobbying by freelancers and bodies representing self-employed workers such as IPSE and ContractorCalculator.co.uk, the Chancellor announced the extension of these changes to the private sector. Originally the Chancellor wanted to introduce the changes in April 2019, so a minor victory for those of us who lobbied against these changes.

If the proposal goes ahead, this change will be implemented in April 2020. Initially, the extension will only apply to medium and large companies. Just like the rules on pensions, it is likely small companies will lose their exemption in a few years.

Just as in the public sector, the private sector client, or the agency, must determine the status of the self-employed worker: inside or outside IR35 i.e. PAYE and NI (including employers NI) paid at source or tax and insurance paid by the freelancer. 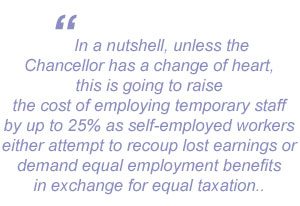 Just as in the public sector, blanketing will not be allowed: each self-employed worker must be assessed individually.

Just as in the public sector, the client will bear the brunt of deducting the correct taxes or face liability for incorrect deduction of taxes.

Clients will face additional administration costs and, as in the Public Sector, self-employed workers are very likely to either demand higher rates to compensate them for loss of income, or the same employment rights and benefits as employed people, or even both.

Obviously, this will increase your costs and reduce flexibility in the UK workforce and, perhaps more importantly, in your company.

How do you decide if a self-employed worker is inside or outside IR35?

The off-payroll rules date back to 2003 and require three tests to determine worker status: